Home » Uncategorized » What is your Heritage?

What is your Heritage?

Today’s post is unedited as I decided at the last second to write something about this Nation called South Africa. I apologise in advance for any mistakes made.

In the vein of celebrating shared culture rather than focusing on cultural divisions, an initiative by the Braai4Heritage calls upon all South Africans to celebrate their common roots by having a braai (barbeque) on Heritage day. The idea has had some high profile converts, the most notable being that of Archbishop Emeritus Desmond Tutu, who in 2007 was made the National Spokesperson for “Braai Day.”

what’s in a name?

South Africa is a melting pot of cultures, but cooking meat over an open flame, transcends all cultures and to me is uniquely South African, overseas they will tell you that a barbeque is the same as a braai, but it is not even close. Cooking over an open flame is not only to braai meat, but to also cook a poitjie (meat and vegetables slowly stewed in a cast iron pot over the fire) 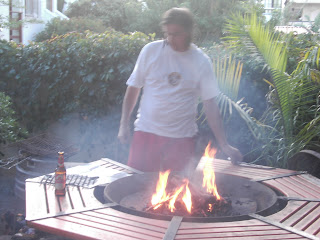 Ever since we’ve had enough garden space to accommodate one, my husband has been on about getting a braai. Soon enough, a huge barbecue arrived and Carl started to get highly testosterone-fueled and devolved to a state of caveman-esque fire-tending and meat cooking. To his credit, he does not conform to the stereotype of British men in that he is actually quite good at it. The fire stays lit, and the meat is cooked through properly, rather than burnt on the outside and pink in the middle. Its also delicious!What is the difference between a barbecue and a braai then? I never really understood this until Carl finally took me to South Africa to meet his family, and essentially, to pig out.It turns out, the word Braai refers to far more than a barbecue. Braai refers to the contraption on which the fire is contained, and what supports the main grill. South African braais are always done over fires, or at least, hot coals. The idea of a gas fueled barbecue is practically blasphemous. Many campsites and hostels in South Africa advertise the fact they have ‘braai facilities’- meaning space for fires.Braai can also mean the food – well, meat – that goes on it. Afrikaners are big on their meat. Anything is acceptable; beef, lamb, pork… crocodile, zebra, ostrich, and of course ‘venison’. Venison in South Africa does not just mean deer meat, it refers to any edible antelope: springbok, gemsbok, impala, even Kudo. (Of these, I personally love springbok, it’s very tender. Kudo tastes more like mutton. Braais can also include potjiekos – meaty stews slow cooked in special cast iron pots. The favorite braai meat is boerewors though. Boerewors are spicy sausages made with both beef mince and pork, but with garlic and spices. Buying good boerewors can be tricky, as there are hundreds of varieties, including ‘braaiwors’, designed specifically for the barbecue, but tend to be lower quality and more fatty. Steaks, wors, ribs and potjie are all served up in large quantities with miscellaneous salads and copious amounts of beer.

Finally, a braai is a social event. As soon as we arrived in South Africa, we were invited to braai. “Bring beer!” Getting a fire going, preparing the potjie, getting it up to cooking temperature and grilling the meat all takes time. Generally it is a family event; everyone gets involved, even if it is just to toss salad or chill the beers. And of course, everyone can sit round the fire, usually drinking, while it all cooks. Braais take all evening, so it is used as a good excuse for a mini party, to catch up with people and as an all purpose get together. Even better, it has to be done outside. This means there is plenty of space, and the gathering is very informal and relaxed. In the case of Carl’s family braai, three generations were involved including our eighteen month old niece, who joined in by getting her braai potato salad mushed up for her, and toddling round offering people soggy bread rolls. The family dogs were also invited, to chew the bones. Sitting round a fire on a warm evening on the edge of a huge mango farm under the mountains in the Lowveld was a wonderful experience.

That said, however, braais are not confined to more tropical climes. We have successfully held braais in our back garden in north east England. Believe it or not, it has been possible to find a whole evening where it was both warm and dry (though peculiarly, this was easier in April than July this year!). We have a large charcoal fueled barbecue, which is strong enough to hold our potjie pot, and on it goes as much meat as we can get in our local supermarket or butcher. The trick is, to get everything cooked at the same time, which requires a constant heat source, keeping the temperature even over the whole grill. I have made my own burgers and even veggie burgers to be grilled on the braai, and it is even possible to make boerewors at home. Carl cooks away happily, I make potato salad, hungry friends arrive and the beer flows freely. “Gesondheid!”

How are you celebrating?

Share your pictures with us and show us your Gees!