Home » Child safety » Can you keep your kids safe?

Can you keep your kids safe?

In recent news, and on a few ‘Mom’  Facebook  groups, there have been talks about abductions and attempted abductions of children, especially around Pretoria and Centurion. An identikit of the two suspects has been released and can be found all over FB.

I know this may start a bit of a controversy but I believe in kid’s harnesses. When my son was about 3 years old and his sister was 18 months old, we were at a very large Hypermarket.   My son was in the goods part of the trolley and my little girl was in the seat. My son had been nagging for a packet of Flings for ages but we were shopping to get them shoes. My husband had wondered off, as men often do. I turned my back to find the right size shoe and when I looked again my son had completely disappeared!  He was nowhere to be found!  30 heart stopping minutes later, with my husband walking up and down the aisles looking for him and me standing at the information desk waiting for someone to respond to the announcement, a woman brought my son to the desk.

We were lucky!  Malls don’t close their doors when your child goes missing and security didn’t help us look for our son.

After this we bought walking straps!  From that day on, if we went to any shopping centre, the kids were on leading straps, which I would tie to the pram because moms know, once kids learn to walk, keeping them in a pram is almost impossible. You can either get the full harness or just the strap that goes around the wrist.

So how do you keep your kids safe?

We get told label your kids things and then I see a kid with a backpack and their name is written on the outside, so anyone can greet your child by name and to your child that person is no longer a stranger.

Try to always shop with another person.  I see it every day.  Your child is in the trolley and you leave the trolley to look at something just a few steps away, seconds is all it takes!  You turn your back to pick something up off the shelf, you look at it, you put it back, you return to your trolley except it’s not there or it’s empty.

Before you say, “but my child will scream blue murder”, how many times have you walked past an adult holding a child and thought, ”oh, shame a temper tantrum”.  You can’t use stereotypes anymore and say, “something is wrong, that black man is carrying a white crying baby, it must be an abduction” because blended families and mixed race families are an amazing product of our beautiful South Africa. Abductors are often women, as kids are more likely to trust them first.

I saw one mom who posted a great idea.  When she is in a restaurant that has a kid’s play area, she gives her child a whistle to blow. It is a simple remedy that could be very effective.

There is also a great product called a child finder, from a company called ‘Safety Angel’ .  They have not paid for this mention but I liked their products and I think it is worth a mention.  These are children’s watches with tracing devices in them.  They also have adult devices. I don’t know prices but it is worth a look. Groupon  also had something similar the other day.

Another idea is a family password. Someone says to your child, your mom sent me or something similar, the child asks for the password, no password- sorry I can’t go with you.

A lot of people don’t seem to have recent pictures of their kids, (myself included), except for the annual school photo. Make an effort to take a photo of kids every 6 months or so. With cell phones it’s easy. Finger prints are also useful.  You just get some ordinary stamp pad ink and roll all 10 fingers in the ink and then onto a card and keep it somewhere safe. 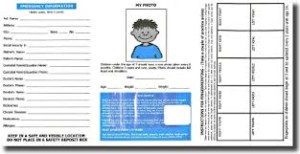 I have older kids who, on the Sabbath, like to go to the Synagogue where there friends are. We do not drive on the Sabbath and I refuse to allow my kids to live like prisoners, so before they leave the house, the girls all have to show me what they are wearing.  They think it is so that I can approve of what they are wearing, (I have occasionally had to make one or two changes into more appropriate clothing) but it is more that I need to know, so that I can give a description, if necessary.  My son is easy:-  black pants, white shirt, black jacket, black kippah (Jewish beanie type cap). They also have to carry a small card with emergency details on it.

Sadly, with the world as it is today, we do have to be slightly paranoid, when it comes to our children’s safety and that can often mean taking a part of their innocence away.

It is a fine balance we have to learn to tread, between giving children the opportunity to be independent and smothering them, to keep them safe.

I would love to hear how you keep your children safe without smothering them?